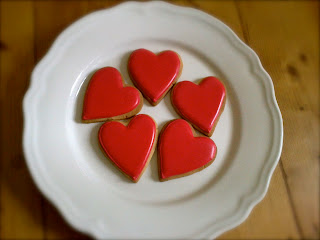 These hearts are pretty cute, huh?

The approach of Valentine's Day was all the excuse I needed to try out my first ever batch of iced biscuits, using the heart-shaped cookie cutter that's been lying idle in the kitchen for months.

I'm a huge fan of Peggy Porschen and her exquisite creations, so I followed her recipe for basic sugar cookies, and her instructions for decorating using royal icing - piping the outline first, and then "flooding" the centre with the slightly watered down gloop.

The designs in her book are more complicated than this, but considering this was the first time I'd used royal icing, I decided to keep it simple.

I even made my own disposable piping bags from baking parchment for the first time, an idea that had intimidated me slightly, until I went to get my reusable bag and discovered it was missing, leaving me no choice but to make my own. Actually, they were much easier to make than I'd anticipated; so much so that I'm not going to bother buying a new reusable one. In any case, when you're decorating with a variety of colours - as I plan to next time - it makes sense to have several disposable bags.

I'm really pleased with the way these cookies turned out. They taste delicious. I'm already scouring Ebay for egg-shaped cookie cutters so I can make something more elaborate for Easter!


1. In a stand mixer or electric mixer, cream the butter with the sugar and vanilla extract until well mixed and just creamy in texture. Don't overmix or the biscuits will spread while baking, and you won't get a neat look.
2. Beat in the egg until well-combined. Add flour and mix on low speed until a dough forms. With your hands, form it into a ball, wrap in clingfilm and refridgerate for at least an hour.
3. Knead the dough briefly on a floured surface. Roll out to an even thickness. Approximately 5mm  thick is ideal.
4. Cut shapes out and place them on a baking sheet lined with greaseproof paper. Put the sheet of cookies back in the fridge for half an hour. Meanwhile, preheat oven to 180°C or gas 4.
5. Bake for 8-12 minutes, depending on size, until golden-brown at the edges. Cool on a wire rack. Once cold, store in an airtight tin.