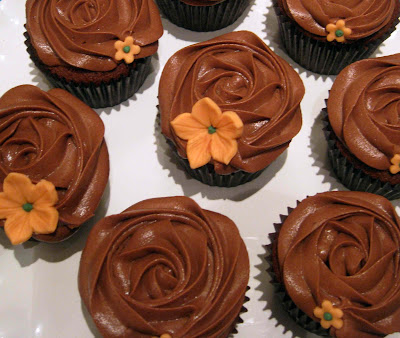 Spring has been in the air this week - and it's amazing how a bit of sunshine can lift your mood.

Chocolate, of course, is another well-known mood enhancer, so really it's no surprise that I've been doing a lot of smiling today!

Since last weekend's carrot cupcakes - with the very subtle orange flavouring of their cream cheese frosting - I've been dreaming up my very own milk chocolate orange frosting recipe. Chocolate and orange has to be one of my very favourite sweet flavour combinations.

My new icing nozzle arrived this week, so it was a perfect excuse to try both things out. And I can say, without hesitation, that I adore them both.

I decided to use a chocolate sponge to accompany the frosting. I think orange cupcakes (plain sponge flavoured with orange zest) would probably work well too. This particular chocolate sponge is really light and moist, and contains melted chocolate, so is more flavoursome than one which has only cocoa powder in the batter.

I've added my frosting recipe after the one for the sponges, so if you're planning on making them, please don't forget to scroll down...I'd hate you to realise too late that you're missing half the ingredients and end up cursing me.

Preheat the oven to 170°C (gas 5). Line some muffin tins (you will probably fill a 12 hole muffin tin and then need to use a few more cases in a second tin).

Put the broken chocolate into a bowl and place over a pan of barely simmering water to melt. (Alternatively, microwave on medium heat, stopping every 20-30 seconds to stir, but be very careful it doesn't burn.) Set aside while you get on with the next bit.

Cream the butter and sugar in a bowl for 3-5 minutes, until pale and fluffy, using the paddle attachment of a freestanding mixer, or a handheld electric whisk.

In a separate bowl, beat the egg yolks for 4-5 minutes using an electric whisk. Pour the beaten yolks onto the butter and sugar mixture slowly, while beating. Do the same with the melted chocolate.

Sieve the rest of the dry ingredients (flour, salt and leavening agents) into a third bowl and mix.
Measure the milk into a jug and add the vanilla.

In a clean, dry bowl, whisk the egg whites with an electric whisk until it starts to form soft peaks. GENTLY fold the egg whites into the batter. Go easy so that you don't knock all the air out of the egg whites.

Spoon the mixture into your cupcakes cases so that they are approximately two-thirds full (no more or they will rise over the top of the cases, which isn't a disaster, but doesn't look as good).

Bake for 20-25 minutes, until a cake skewer inserted into the middle of one of the cakes comes out clean. Take out of the oven and leave in the tin(s) for 10 minutes, then remove them and allow to cool on a wire rack.

Melt your chocolate together, in the same way as you did for the cakes.

Beat the cream cheese and soft butter together with an electric whisk or the paddle attachment of a stand mixer until combined.
Add the melted chocolate, vanilla and orange extracts, and mix well.
Sieve the icing sugar and cocoa powder on top and beat, first at low speed and then a little higher, for a couple of minutes. Add a teaspoon or two of water while whisking, to make the icing a little softer.

Then comes the fun bit - decorating your cupcakes.

You can either pipe the frosting on or slather it on with a palette knife, and add any decorations you like - or leave the orangey chocolate (which smells as amazing as it tastes) to speak for itself. I used a Wilton 2D piping tip for these, to get the rose swirl effect. 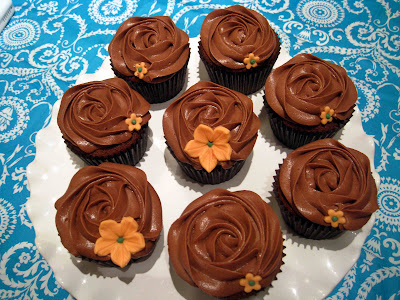