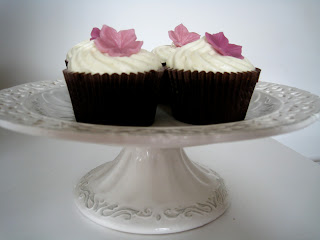 Yes, I know. They don't look much like carrot cakes. But that's only because I opted not to make little orange-coloured decorations, and went for fondant flowers instead.  Let me tell you though, these are chock-full of carrots. While I won't lie and attempt to convince you that they're a health food, it's no exaggeration to say that these are among the best carrot cakes/cupcakes I've ever tasted. And therefore any perceived health benefits, or lack thereof, are irrelevant.

The cream cheese frosting too is divine. If I was really gluttonous I could probably sit and eat a small bowl of frosting all by itself (and then feel queasy, but that's hardly the point).

I made these in the morning, while simultaneously making breakfast for my kids and trying to get ready for work. Because of the rush I didn't take any pictures of the actual process, but rest assured, this recipe is really, really simple. I don't think you could mess it up if you tried.

For the frosting (makes a lot):
60g white chocolate
225g cream cheese, softened
115g unsalted butter, softened
1 teaspoon vanilla extract
½ teaspoon orange extract (Lakeland do a good one, and Sainbury's sell Valencian orange extract, which is the one I used. It's much cheaper and is perfectly adequate for this recipe.)
500g icing sugar

Beat the eggs and two sugars together in a large bowl and mix in the oil and vanilla extract. Fold in the grated carrots and pineapple.

Sift the flour, bicarb, salt and spices on to the top of the mixture and stir in gently until evenly mixed. Finally, fold in the walnuts.

Fill your muffin cases two-thirds full and put in the oven for around 25 minutes, or until a skewer inserted in the centre of a cupcake comes out clean. Cool on a wire rack.

While the cakes are cooling, make thc frosting. First, melt the white chocolate in a bowl set over a pan of barely simmering water. Allow it to cool.

Beat together the cream cheese and butter until smooth (or smoothish, anyway...mine still had lots of tiny lumps in but once I added the sugar they disappeared). Mix in the white chocolate, vanilla and orange extracts. Gradually beat in the icing sugar until the mixture is fluffy.

Put the icing into a piping bag - or just spread on with a spatula - and decorate as you wish. You could keep it simple and just scatter some more chopped walnuts on top. I used sugar flowers that I'd made a couple of days previously, as I had to get to work and didn't have time to make miniature carrots. 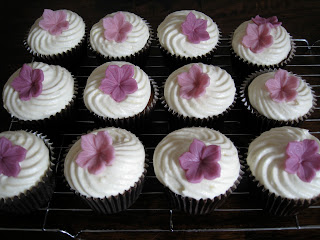 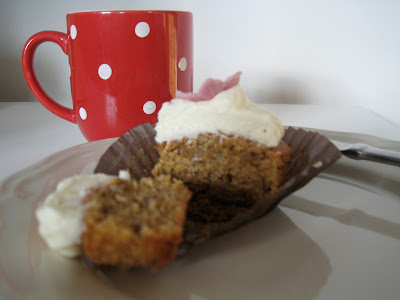