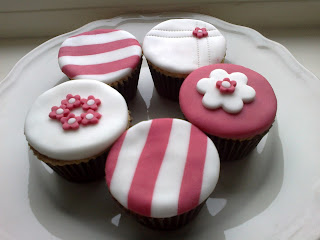 OK, I admit it - these almondy, flourless little cakes aren't going to win any prizes for authenticity. They're pretty yummy though, if you like Bakewell tart, almond macaroons and that kind of thing. And I, for one, most definitely do.


I made these as a bit of an experiment, adapting a recipe from 'Cupcake Magic', by Kate Shirazi, for the sponges, and then mixing up a bit of raspberry buttercream and rolling out some shop-bought fondant icing to decorate them.


You'll see the buttercream ingredients are approximate; that's because I just threw in some icing sugar and butter and beat it with an electric whisk until it all came together. You can use roughly equal proportions of sugar and butter if you prefer. 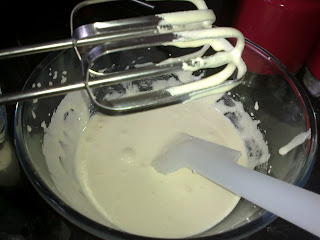 First, beat the egg yolks and caster sugar together until pale (see photo).

In a clean, dry separate bowl, whisk the egg whites until they form stiff peaks.


Gently fold the egg whites into the egg yolk mix, then fold in the ground almonds, almond essence and baking powder. 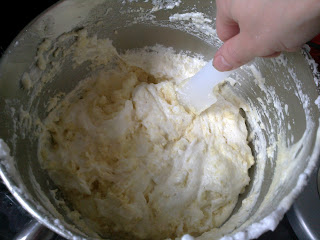 Spoon the mixture into your baking cases and bake for 15-20 minutes. Keep an eye on them to make sure they don't burn, as burnt almonds taste very bitter.

Cool on a wire rack.

While the cakes are cooling, you can make the buttercream. Place the soft butter and icing sugar in a bowl and use an electric whisk to beat until the mixture is light and fluffy. Add the raspberry jam and beat briefly again.

Now: here's the optional bit. When the cupcakes are cool, use a sharp serrated knife to carefully cut a hole in the top of each cupcake, about 2cm x 2cm. 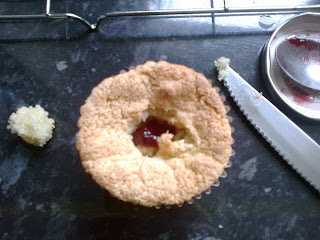 Spoon ½ a teaspoon of the jam into the hole. It should look something like this.

Alternatively, you could put in a dollop of raspberry buttercream icing.

Now replace the piece of cake you cut out to cover up the hole.


When all the cakes have been filled, spread a thinnish layer of buttercream over the top of each and smooth with a spatula. Don't go right up to the very edges of the cake, or you won't get such a neat finish. The buttercream will ensure your fondant icing has something to stick to.

Sprinkle your work surface with icing sugar. Colour some of your fondant icing, and roll it out. Using a circle-shaped cutter or a glass, or whatever you have handy, cut out a circle that is about the same size as the surface of your cupcakes. It's best to do one at a time and cover the rest of the fondant in clingfilm in the meantime, to stop it drying out.

I admit, these aren't the easiest cakes to top with rolled fondant, as they are very light and fragile, but persevere! (Either that or go down the easier route of just pouring some simple glacé icing - icing sugar mixed with water - on the top, and forgetting about the buttercream and fondant altogether.)

Repeat with all the other cakes...et voila! 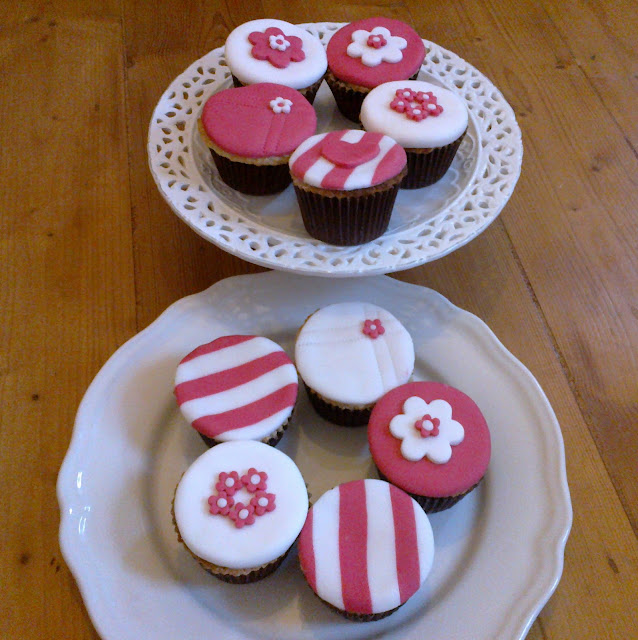